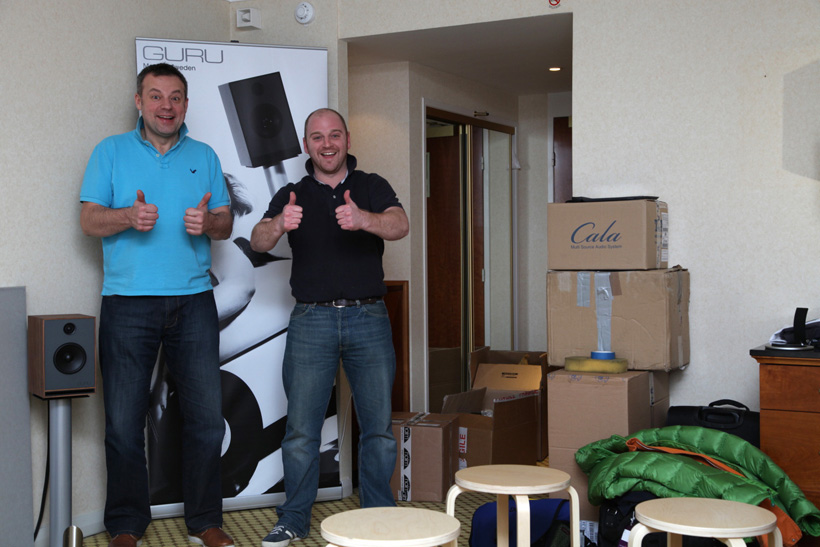 Partly by dint of weak competition Bristol has become the best show on the UK scene, the one with the biggest buzz and often some of the best sounds. This year it seemed as lively as ever with hardcore enthusiasts cueing round the block to get through the doors first thing Friday morning. I got there on Friday night and had a sneak peak at Tom Tom’s Guru room where James and Henry had put together a modest but extremely entertaining system consisting of a Naim UnitiLite and the new Guru Junior speakers (£800). This was the first time that the fully finished Juniors had been shown and I have to say they look rather good. The basic recipe is as it was when the pre-production models appeared last year, the soft dome tweeter from the QM10two combined with the mid/bass driver from the original QM10 in a slot ported cabinet that while ostensibly similar to many standmounts has some distinctly Scandinavian styling touches that set it apart. There were three finishes on display: lacquered white woodwork with white anodised aluminium baffles front and rear, a lacquered black version with gun metal baffles and the pair in action which combined gun metal with a walnut veneer to great effect. It sounded good on Thursday night but by Friday afternoon was sounding very entertaining, so much so that this diminutive speaker became the talk of the show. Having the charming Abbie, who modelled for the ‘Swedes have more fun’ shots in the room, handing out flyers in the lobby might have helped get people in there but it was the system itself that got tongues wagging. So much so that a number of industry figures with no connection to Tom Tom or Naim were found in the room over the weekend. One even suggested to me that they sounded like Epos ES11s which may not be far from the mark. 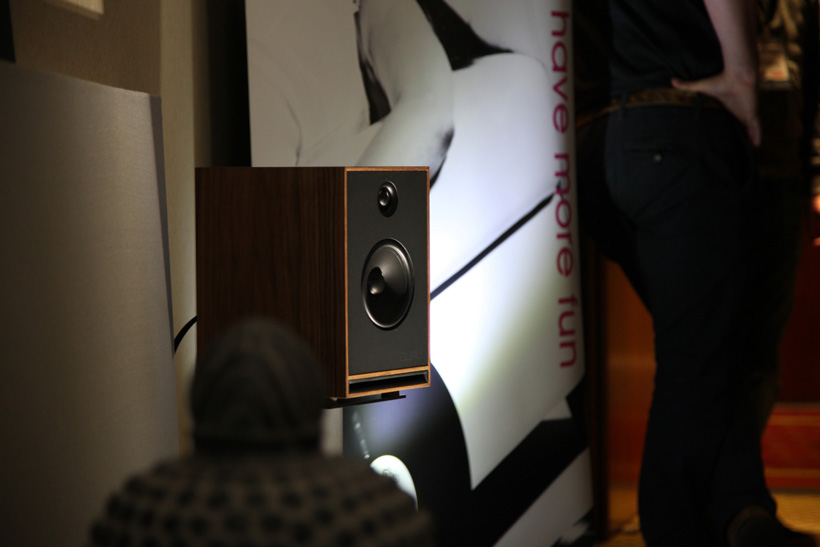 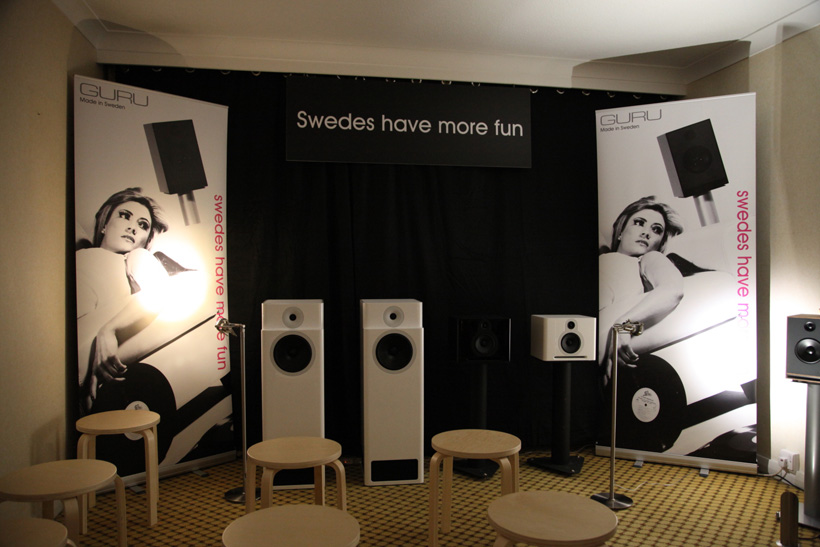 Rega was celebrating its 40th anniversary with a patriotic room set and matching turntable but also had two new components in action and another at the prototype stage. The latter is the Saturn-R CD player, a replacement for the Saturn with the same top loading mechanism as the Isis, somewhat closer to availability is a new phono stage called Aria (£798). This is housed in a Rega DAC style half width case and has adjustable gain to suit both moving magnet and moving coil cartridges, it also has variable impedance in order to get the most out of MCs. Powering the Rega system was the new Elicit-R integrated amp (£1,598), this uses multiple output devices of the sort found in a Brio-R and has a rated output of 105 watts – a positive powerhouse by Rega standards. With the droolworthy RP8 turntable and RS7 speakers the Rega system sounded pacy, dynamic and very engaging. 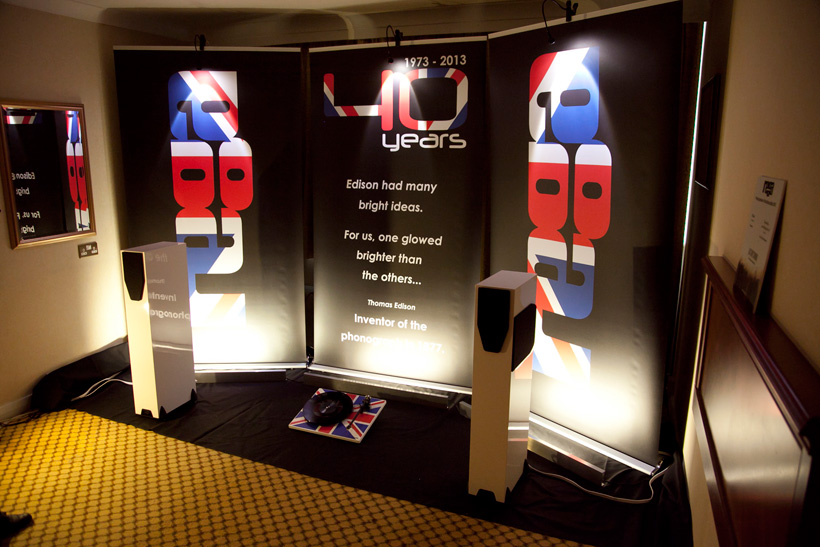 Another system that was hard to walk away from was being used by the Chord Company in closed room dems for their new Tuned Array cables. This is a change to the geometry of digital and analogue interconnects that produces a dramatic improvement in terms of imaging and reduction in perceived distortion, so dramatic that it has been applied to all of Chord’s interconnects. Nigel Finn of Chord Co demonstrated the effect it has on the Sarum coaxial digital cable by playing a rather good piece by Son House (from Crazy on the Weekend), the Tuned Array version delivering greater bass extension, more coherency and palpable stereo imaging. I will be visiting Chord’s Salisbury base to find out more. 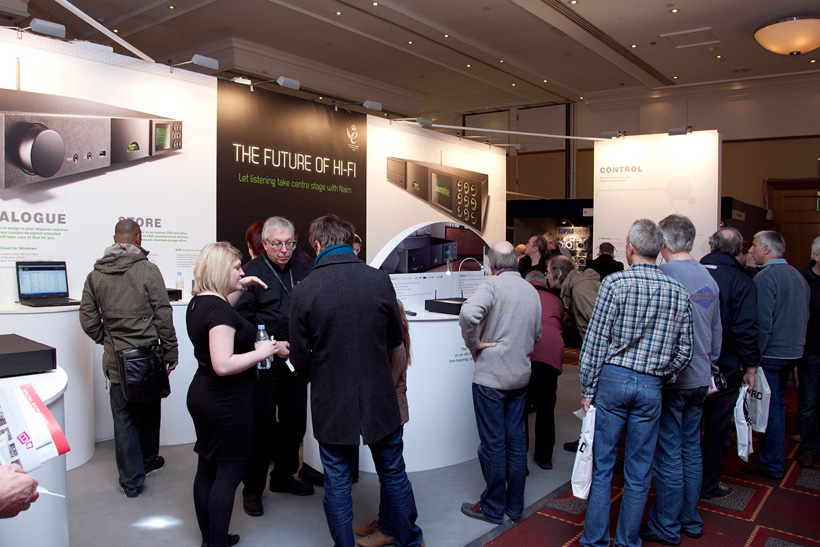 Naim was running closed door dems of its three levels of streamers starting with an ND5 XS with XPS and working through NDX with XPS2 to the range topping (well almost) NDS and 555PS. They must also have been playing the new DAC-V1 and NAP 100 which can be seen under a laptop between the speakers but that wasn’t mentioned whilst I was in the room. I didn’t get to hear the full dem, they ran out of tickets too quickly, but did get into the room early on Saturday along with Martin Colloms (the critic in Hi-Fi Critic) who was raving about the NDS, apparently his new favourite digital source. The rest of the system was a NAC 252/Supercap preamp with a NAP 300 power amp driving Ovator S400 speakers. The result was very convincing indeed even when Doug put on Mario Biondi, his favourite cruising down the highway with the top down track, a hard mindset to get into on a grey February day in Bristol! 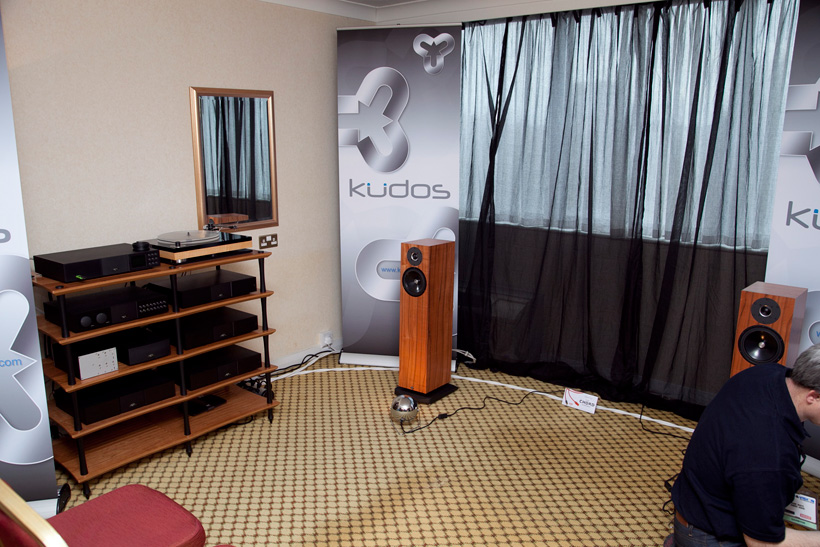 In the Kudos room they had another substantial stack of electronics from Salisbury and one of Willi Bauer’s DPS turntables with ARO arm driving the new Cardea Super 20 floorstander. This is a pretty serious speaker as the £4,250 price tag infers and has a lot of the technology from the range topping Titan T88 model including copper shorting rings on the main driver and the Crescendo tweeter. The seven inch mid/bass unit has a hand treated paper cone and a 26mm voice coil and sits in an beautifully veneered cabinet with a downward firing reflex port. This feature makes them more flexible with regard to room placement and more attractive with regard to holes in the side or the absence thereof. 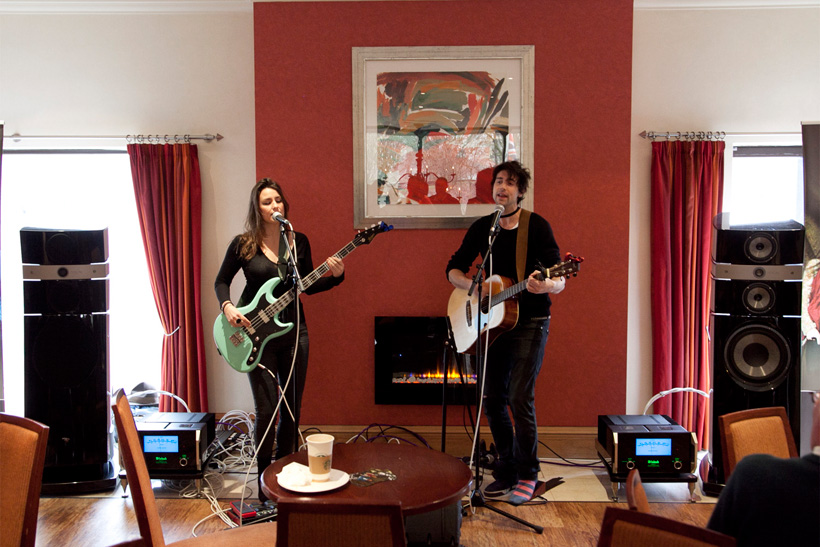 Focal didn’t have anything new on show but had brought along a pair of Stella Utopia EM speakers to use as the PA system for local band The Luck to play through on the terrace. This has to be the most expensive system per watt that any band has played through ever let alone a young couple with guitar and bass. They kept the level sensible however and the result was an uncanny realism although it might have sounded better with a stack of NAP500s!