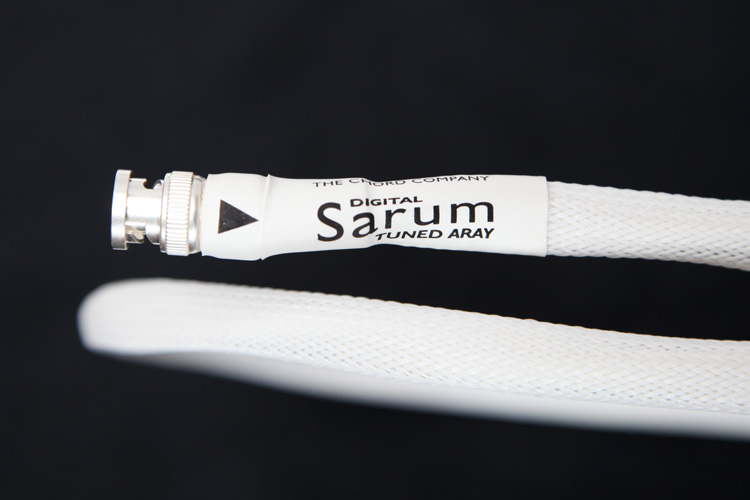 A couple of months back I went to see Chord and had the full Tuned ARAY (TA) dem courtesy of in-house music nut Nigel Finn. The experience was enthralling enough to warrant getting some cables to try at home, a pursuit I generally avoid like the X Factor because after all how can a cable enhance your musical enjoyment? Let alone a digital cable. So I persuaded Nigel to lend me a length of Sarum TA digital coax and once he had run it in for a while I got it up and running. What first struck me is that it’s darn stiff and you have to wonder if that has something to do with the sound but so was the non TA stuff so I bent it in a U shape and connected a UnitiServe to my Resolution Audio DAC (the Sarum had a BNC adaptor at the send end which is a no, no but this was what I had been living with till then so the playing field was kept level). It replaced a Townshend Isolda EDCT coax cable which has the advantage of the deep cryogenic process he pioneered and which generally does a good job. Initially the change was not obvious, it timed better as expected but it didn’t seem as resolute in detail terms, not quite the result I’d heard when listening in Chord’s room at full bore. It soon became apparent however that even at normal listening levels the system was producing a more engaging sound, it has extra verve and the music was urging me to get off my sorry arse… but you probably don’t want to hear about my dad dancing, doh!

The point is that the TA magic was happening in front of my ears. I also tried it between a rather good CD transport and my Resolution Audio, this set up avoided connection converters and proved to be the most enthralling disc playback I think I’ve ever enjoyed. The drive, dynamics and pace were in another league, gobsmacking to be frank, I really didn’t know that CD could sound so good. Whatever you do don’t sell your disc collection, stick it in the attic if you want the space but until you have ripped them at maximum, lossless quality don’t let them go.

Nigel kindly put together a BNC to RCA length of Sarum TA because he is aware of how limiting BNC to RCA converters can be. This became apparent as soon as I swapped in the new cable, there was a massive increase in presence – the sense that the singer or instrument is in the room – this came partly as a result of significantly improved bass which had both greater power and depth. The Police’s So Lonely which had sounded so good in Chord’s room began to do the same for me, Sting’s bass was now almost dubworthy while the guitar had acres of reverb and echo. The effect was hugemungous to coin one of my son’s phrases and required a re-calibration of expectations. This cable even outperformed a shorter (about half the length) Roksan BNC to BNC cable when I used it with the Naim DAC-V1 (of which more soon). A state of affairs that shouldn’t be true given the electrical advantages of BNC yet thanks to the TA effect is patently so.

Once I had the BNC to RCA Sarum TA in the listening room I put the RCA to RCA one into my music reviewing system between a Rotel CD player and Naim SuperUniti. A system which I go out of my way to leave alone and not change components in. I had been using a Chord Prodac coax cable previously so the cost increase was unsubtle but so was the musical reward. Even with totally unknown music it was apparent that the system had become more musically engaging. In practice it means that the system can no longer be used for background listening, it has become an attention grabber for all the right reasons. Whether played loud or soft the way people are playing and what they are playing is that much more evident and interesting.

Everything sounds superb in this system now, it really makes the SuperUniti shine, it always worked well with my Living Voice Auditoriums before Sarum TA but not to this extent. As you can imagine the reviewer’s life is a precarious one and I now lie awake at night worrying about when Nigel will want his cables back!

We are delighted to now offer the full range of official Naim Merchandise to purchase on our on-line shop, alongside a full range of Naim parts & accessories plus the largest selection of pre-loved Naim components on the planet.Take a look here Genuine Naim Audio parts, cables and audio accessories (tomtomaudioshop.com)…See More
yesterday
0 Comments 0 Likes