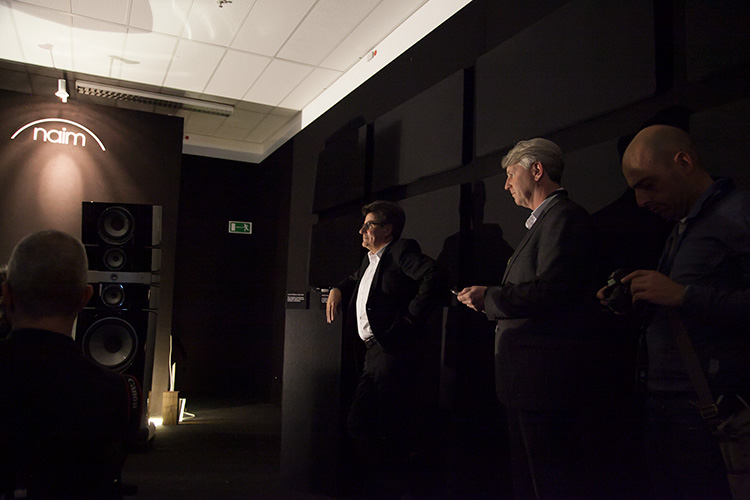 Naim
Paul Stephenson announced that the company now employs over 150 people and expects turnover to reach £25M this year. Moral has also been boosted by a Queen’s Award for Innovation, which should help maintain the £3M that the company invests in R&D.

Marketing director Ryan Latham gave a brief overview of Muso and mentioned that a premium streaming service will be added to the player prior to launch, in fact an announcement is due very soon as to whether it’s people’s favourite Spotify or not! Steve Sells gave a run through of Statement which is due on sale in September, it has no overall feedback between stages, is balanced throughout and is ten times faster than existing Naim amps, it can also deliver 9kW bursts of power, should you feel the need. We now know how much each part of Statement will cost should you want to work up to the full monty, £45,000 for the NAC S1 and the same for each NAP S1.

Naim and Focal demonstrated Statement and Grande Utopia III in a large booth with Gérard Chretien’s audiophile favourites; My Favourite Things by Youn Sun Nah, a Gabriel Garcia-Fons acoustic bass piece recorded in a church and a version of Berlioz’s Symphony Fantastique made in Lyon. Then for reasons not hard to gather he handed the tablet to Doug Graham who proceeded to show us just what 9kW bursts sound like when Jeff Beck plugs in. The track was Space for Papa from the album called Who Else, and it was stunning in all respects. 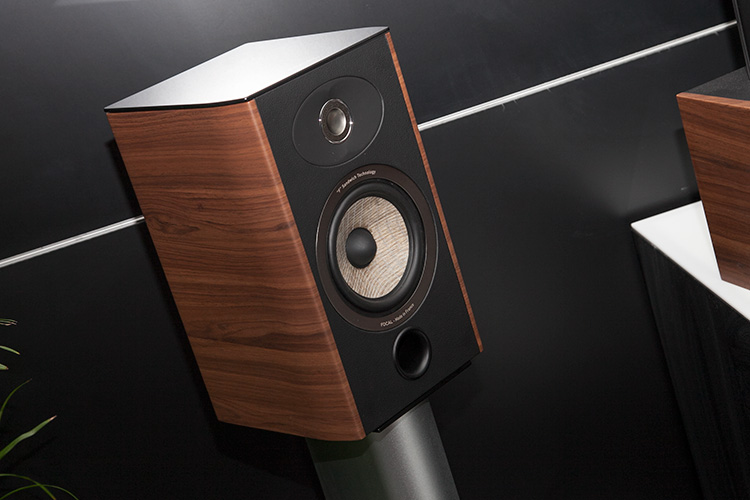 Focal
Now that they are using them in-car as well as in the Aria range Focal have upped their production of flax driversto 500 a day, a proportion of which will find their way into the new Aria 905 (above), the smallest model yet. The company has also added a Spirit One S to its growing range of headphones, this one is designed for noisy environments so could be invaluable in the living room!

The big news in the wider scheme of things is the Dimension soundbar, this sector is the fastest growing part of loudspeaker sales so it’s natural that Focal are claiming their piece of the action. Dimension is a ‘high end’ sound bar with five identical drivers in an aluminium chassis that’s only 65mm deep (2.5inches in old money). Rather like the forthcoming Naim Muso it has 450 watts of class D power spread over six channels. Two subwoofer options are available, one forming a base for a TV behind the bar and the other being a separate unit. It has all the bells and whistles alongside pat pending tech so must be great, price in Europe will be €999 plus sub. 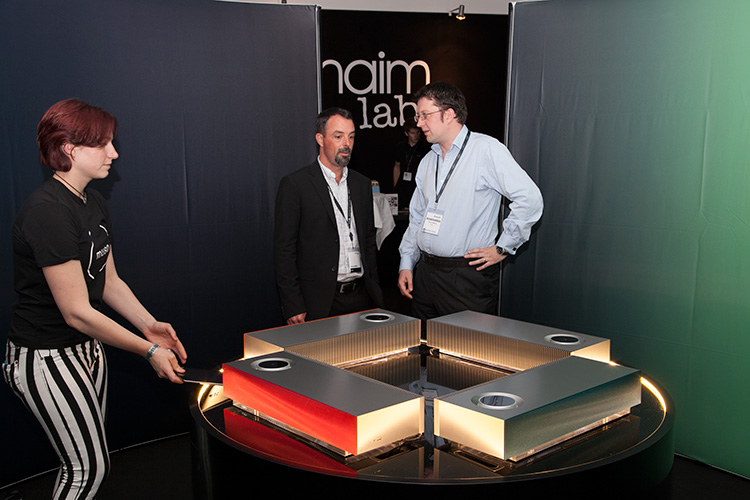 Trevor Wilson in action in the Muso booth

Muso
Trevor Wilson, Naim’s streaming wunderkind, told me a little bit more about Muso, Naim’s foray into real world audio due for launch this autumn. It has a lovely knob for starters and one that adjusts volume optically via a rotary encoder using castellation on the underside. For end users this means no mechanical contact and thus minimal wear and little likelihood of dirt undermining performance, it also guarantees feel and we all know how important that is. The knob also has ‘halo lighting’ for sex appeal and attaches to the chassis with an air-seal bayonet fixing so as not to undermine the integrity of the loudspeaker cabinet. The knob gives access to five net radio presets, it can store up to 40 presets but the rest require the Muso app. The various control and input switching facilities are context aware so you won’t see options that don’t apply to the selected input.

Another detail that wasn't obvious at launch is the way that the lesser changed connections of Toslink optical digital, Ethernet and mains power are hidden underneath at one end of Muso. The inlet forms a handhold matched by the port mouth at the other end, clever stuff. 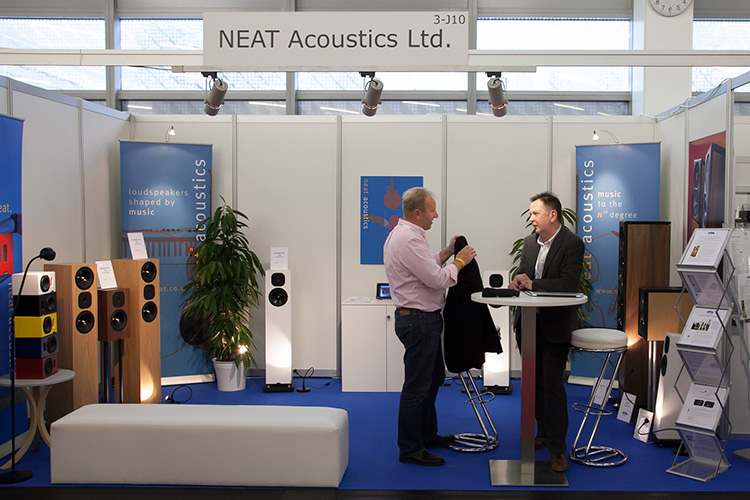 Bob Surgeoner keeps his cool in the Munich mayhem

Neat
Following on from last year’s Motive SX launch Bob Surgeoner was showing the three new Momentum SX models, two are refinements of the previous range and one is a new addition. All three feature the SXT-A1 anodised aluminium tweeter, an change that required re-tuning the crossovers which are hard wired with spendy Mundorf caps and inductors. The Momentum SX3 standmount replaces the 3i and the SX5 takes over from the 4i, the latter is available with optional slate base for enhanced stability and more consistent low frequency performance from the down firing iso-baric bass section. The Momentum SX range has been expanded with SX7 a larger two-way floorstander with isobaric loading on the mid/bass which will come in at around £5,800. 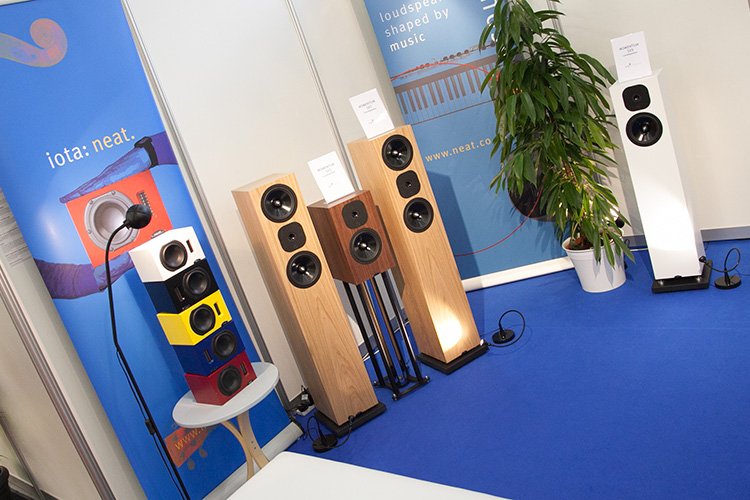 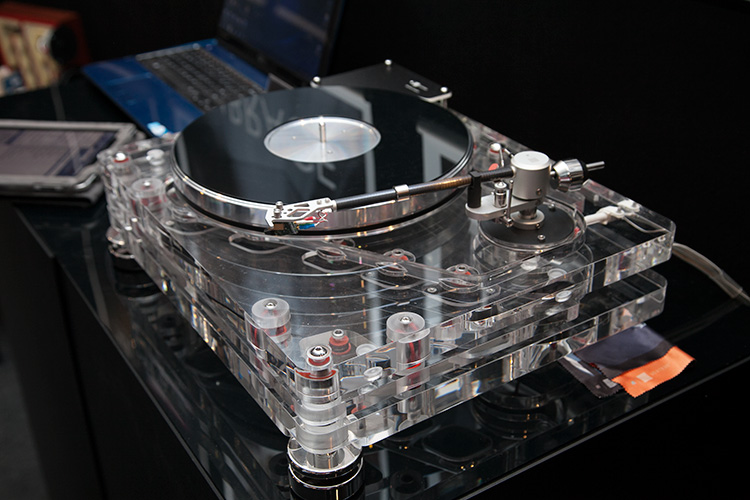 Vertere SG-1
Now that Touraj has officially finished his Standard Record Player or SG-1 and arm he was able to take it to Munich and wow the throngs of hard bitten audiophiles. The SG-1 TPA is Vertere’s rather more affordable alternative to the Reference Tonearm launched last year, it feels like a uni-pivot but avoids the tendency for point contacts to ‘skate’ or chatter by placing a point within three balls, hence TPA or Tri Point Articulated. The arm and turntable are entirely British built and feature a number of innovations including a 48-pole low voltage motor that moves on a bearing, a refinement of the system used on the TMS turntable, and a three tier plinth with plenty of carefully placed decoupling mounts. The turntable itself can be upgraded to Reference status with the replacement of key parts such as PSU, platter, motor etc which is a nice way of building in long term appeal to those who aspire to vinyl greatness. Out of the box the SG-1 is £12,500 and SG-1 TPA £1,800 with standard internal wiring. 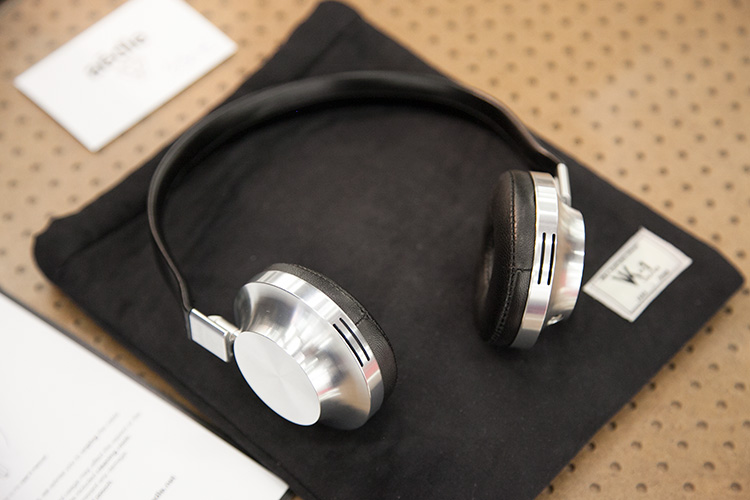 Aëdle VK-1
Made in France, it’s not something you see on many headphones but relative newcomer Aëdle has made an impression with its stylish VK-1 alumimium and leather creation. At Munich they unveiled a forthcoming black and silver colourway, previous models being available in silver and tan or all black. They sound sweet and look cool, I want a pair. 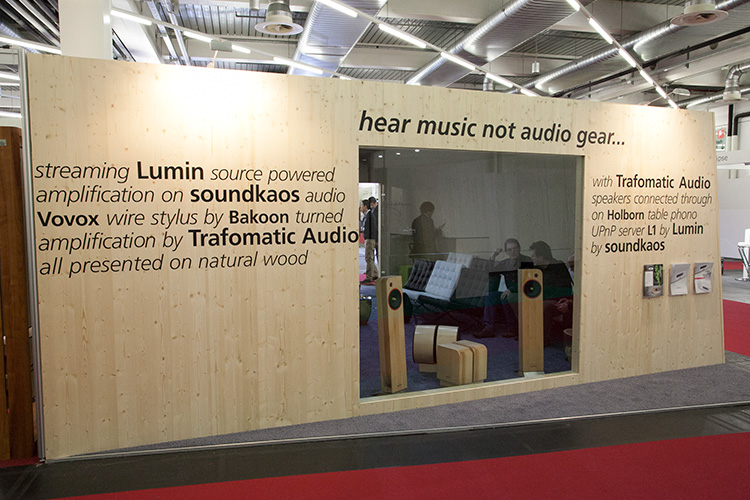 Soundkaos
James was insistent that I find Soundkaos at the show, saying that I would be in for a real treat with their unconventional speakers. Run by Martin Gately and built in Switzerland, the unusual tonewood designs are by UK acoustics expert Christian Ellis. Just to keep you guessing their system was demonstrated in a wooden cabin with a slogan on the outside declaring “hear music not audio gear”. On the inside the poster says “Keep Calm in no way we are Audiophiles” point taken. Soundkaos’ oval shaped Wave 40 speakers are made with solid spruce baffles and bentwood sides in maple, cherry or walnut. The 8 inch drive unit is based on a Telefunken classic and covers the spectrum up to 6.5kHz where it hands over to a ribbon tweeter, the little block with cables going into it being an external crossover. For Munich Soundkaos introduced the D12 subwoofer, a twin cabinet barrel shaped creation with a 12inch aluminium driver in each half and 400 watts of ICE power to drive them. It sounded highly entertaining but clearly not audiophile, oh no! 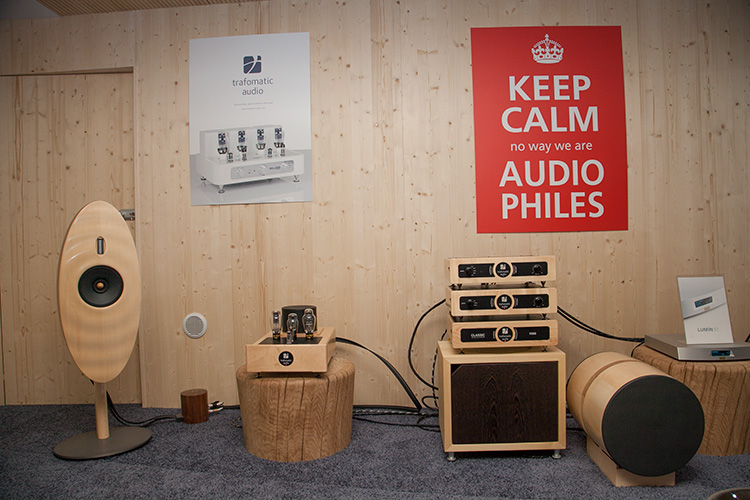 Fantastic summary and photos James - many thanks on behalf of those that were not able to attend the Munich show.
Scott.

Comment by Tom Tom Audio on May 22, 2014 at 21:39
I would love to take the credit but I could not make it this year so I have to thank Jason for his excellent coverage of the event