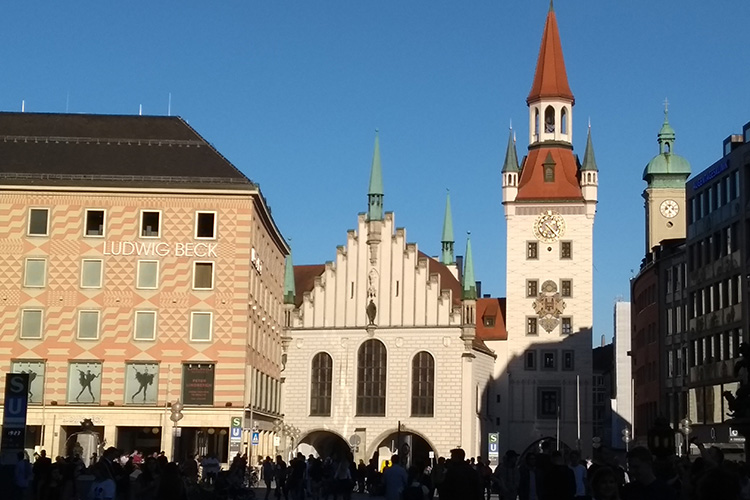 Munich in the spring is always a pleasant place to be, albeit not so much so in the upper reaches of the MOC exhibition centre that houses the High End show. There the temperature can reach tropical levels with humidity to match, but this didn't stop our intrepid reporter from fighting his way through the madding crowd to see what the most important brands were up to. 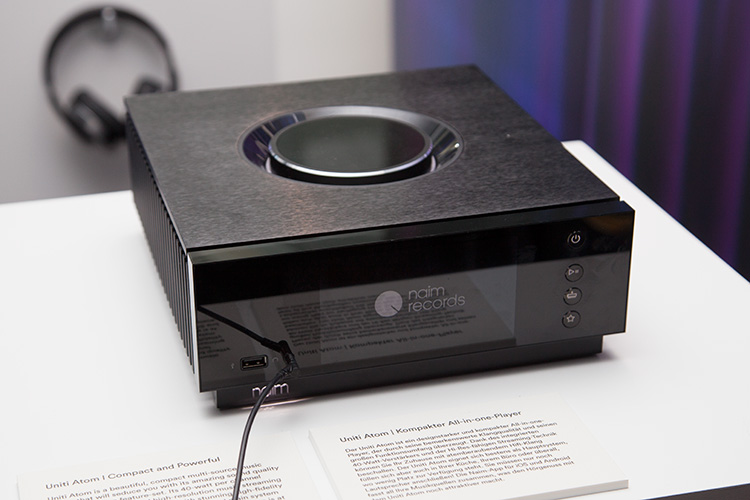 Naim and Focal took a new space at the event, somewhere that was a bit quieter than their usual shell-space in the main halls. Here the company put on a fine display of the latest kit, including the now imminent Uniti range. I was told that the first models will be available in the next month or so with the Atom to get out into the world before the rest. 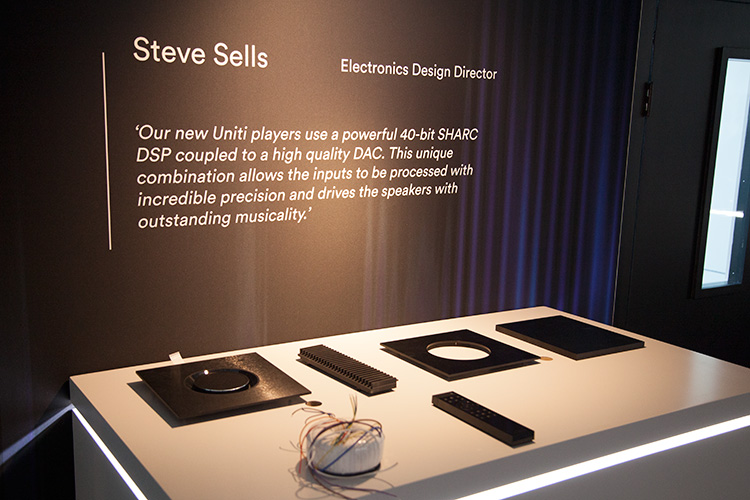 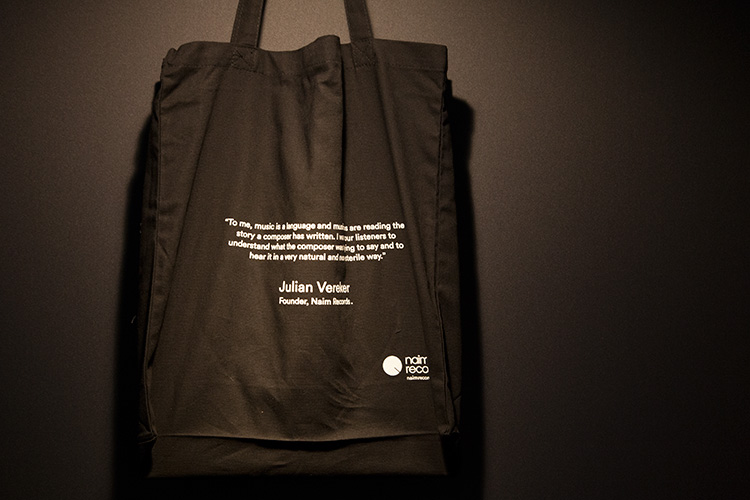 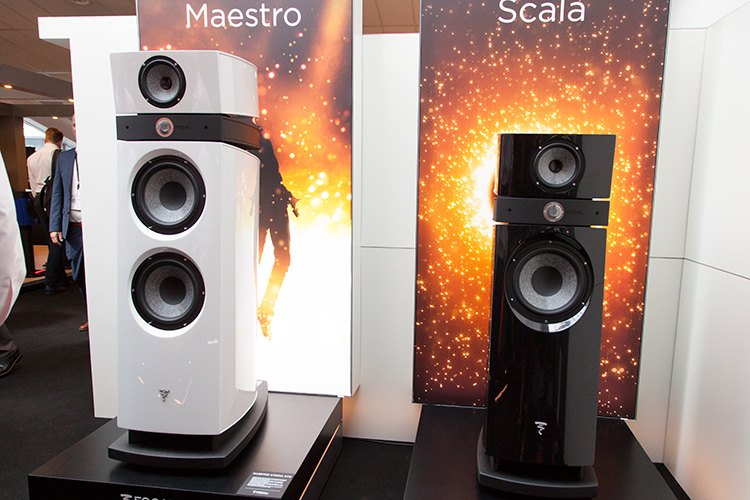 Focal took the opportunity to launch revised versions of two of the most popular Utopia III models, Maestro Utopia and Scala Utopia are now available in Evo form. This changes a number of things but leaves the beryllium tweeter alone, the midrange now has a mass damped surround which consists of a half roll ring that adds weight in order to kill vibration coming from the cone more effectively. The other big change is to neutral inductance circuit magnet systems, the aim being to reduce harmonic and intermodulation distortion. The bass system also has new acoustic foam for greater low frequency control, but the most radical change is appearance of bi-wiring terminals. Focal has long advocated single wired connections but with Evo they have jumped the shark and offer two sets of terminals. Finally the colour palette has been expanded to include a metallic British racing green and a rather nice ash grey alongside Carrara white, black lacquer and metallic blue. 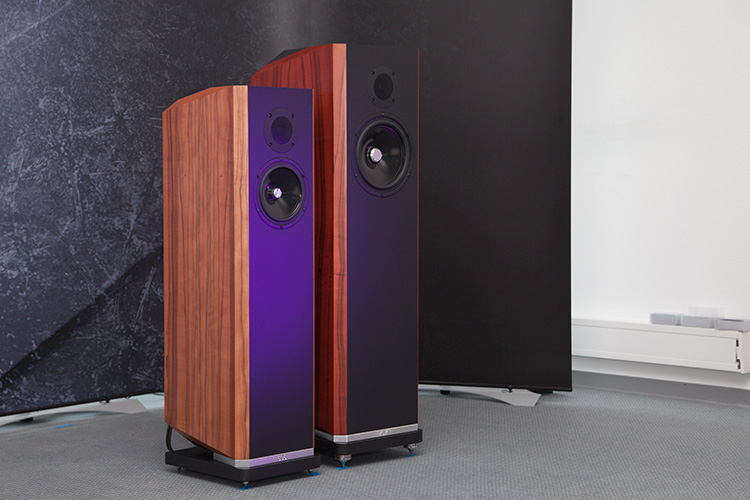 Kudos took their first room at High End to show the world the latest additions to the Titan range, these are scaled down versions of the 808 shown at Bristol and come in single piece, floorstanding boxes that incorporate the isobaric loading, down firing port and floating side panels found in biggest Titan. The smallest at 950mm high is the 606, this is a two-way with 6.5inch bass drivers, the larger 707 has the same arrangement but with 8inch drivers. They have custom SEAS drivers with copper shorting rings in the cone units and a fabric dome on the tweeter. Don't worry, they aren't blue, it's just the lighting! 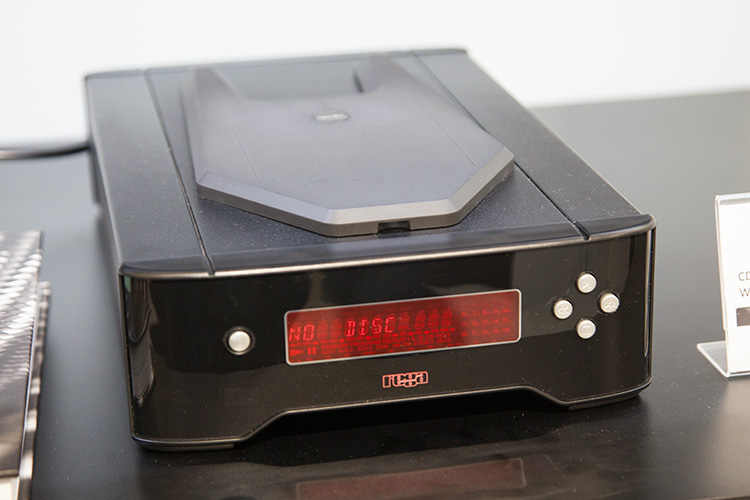 Rega launched most of its new product at Bristol but managed to get the new look Apollo CD player to Munich for High End. I’m told that it remains the same fine player underneath but the casework has been revised to match the new Brio integrated amp. 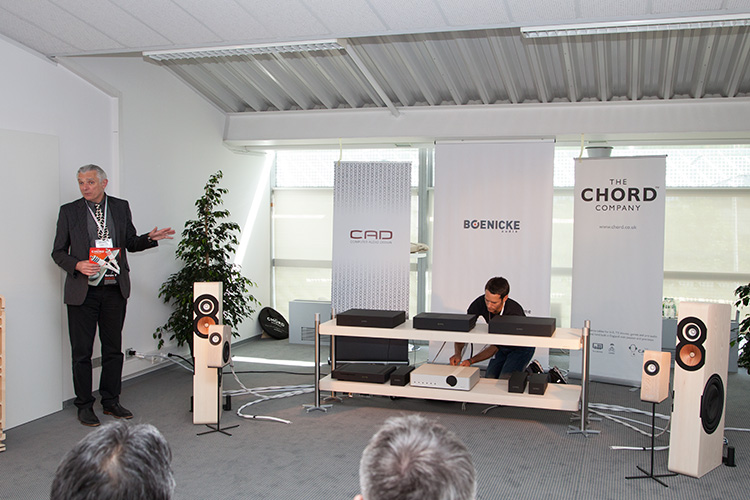 Chord Co also made their High End debut this year and joined CAD and Sven Boenicke to demonstrate their Sarum T and ChordMusic cables to excellent effect, so much so that I have resolved to send my Sarum back to the factory for the upgrade toute suite. 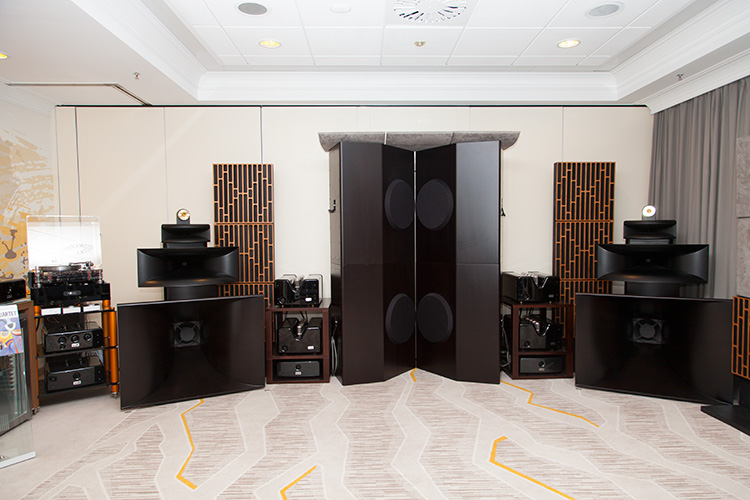 Vertere were at the spin-off Hi-Fi Deluxe show in the quieter environs of the Marriott hotel. They didn’t have a room of their own but worked between the FM Acoustics and Viva rooms, which proved somewhat more taxing than Touraj had anticipated. A Vertere RG-1 turntable and Audio Technica ART1000 cartridge could be found driving a massive Viva valve and horn system to pretty impressive effect, there’s nothing like a wall of loudspeakers to generate dynamic energy. 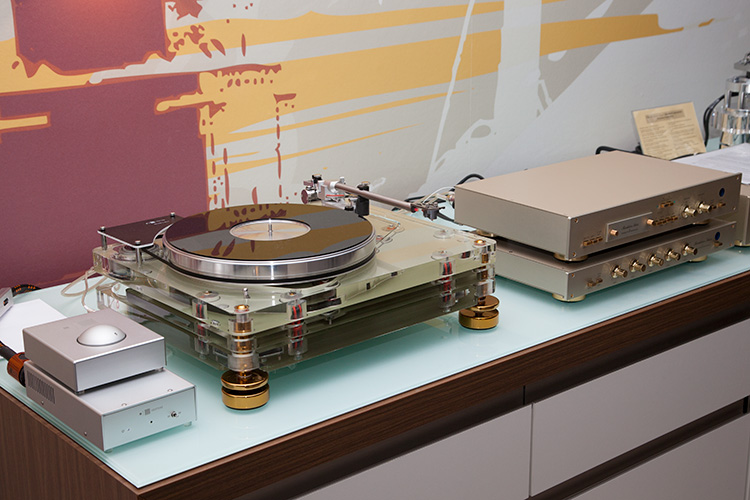 Things were a bit more subtle in the FM Acoustics room where the same model in a different finish was being played through a more expensive if not necessarily so large system. 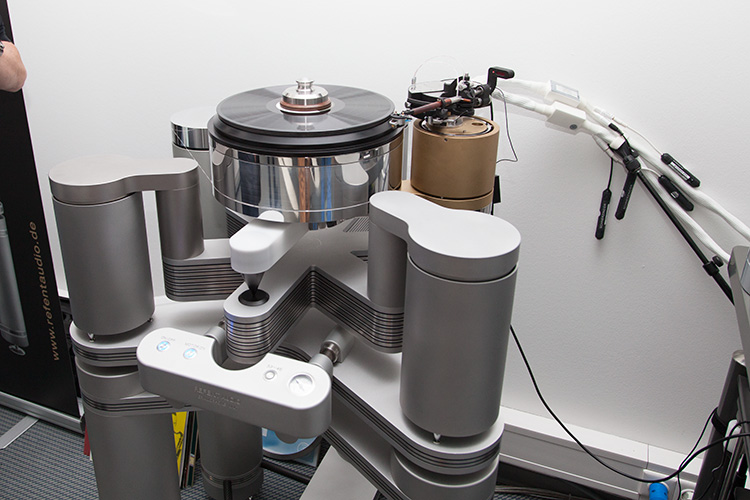 The High End is a great place for spotting audiophile excess and I have rarely come across a turntable that is more excessive than the Refent Gramophone. Weighing in at 460kg it’s not the sort of thing you’d want to move but you have to admire it’s ambition, but the less said about the arm cable the better. 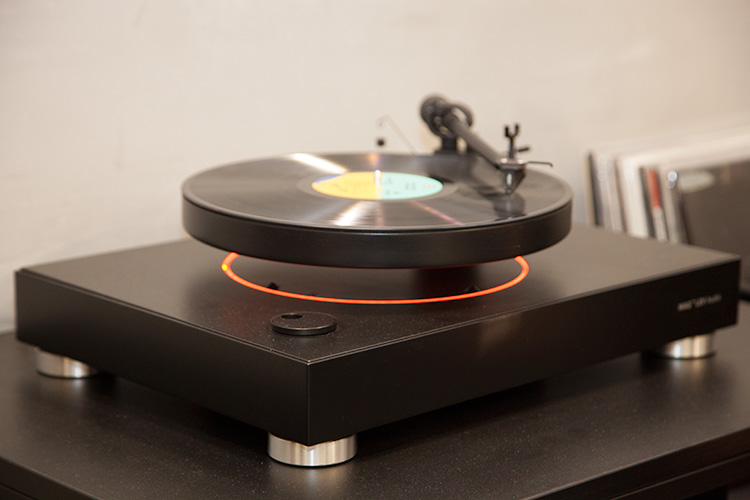 The prototype Mag Lev levitating turntable is more up my street, it’s such a cool design that it doesn’t really matter what it sounds like, it will sell. If they can get it into production that is, and assuming a phono cartridge can survive that sort of magnetic field! 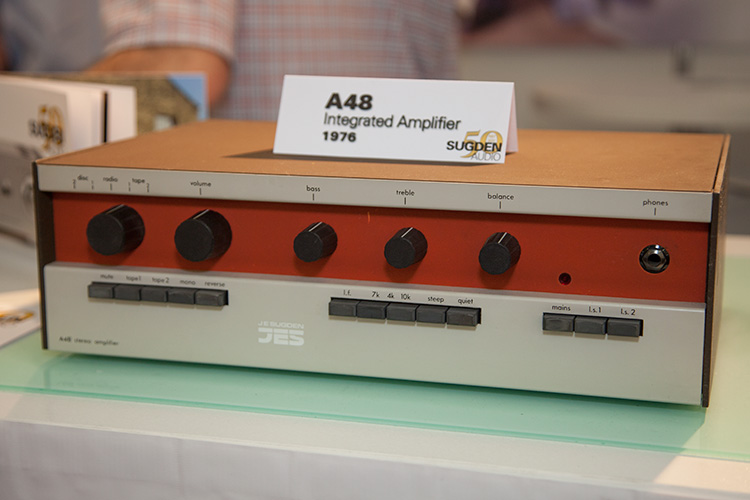 I also rather like the 1976 Sugden A48 that was on display, I could have bought one of these brown and orange beauties when I was at college but was too ignorant to realise what it was! 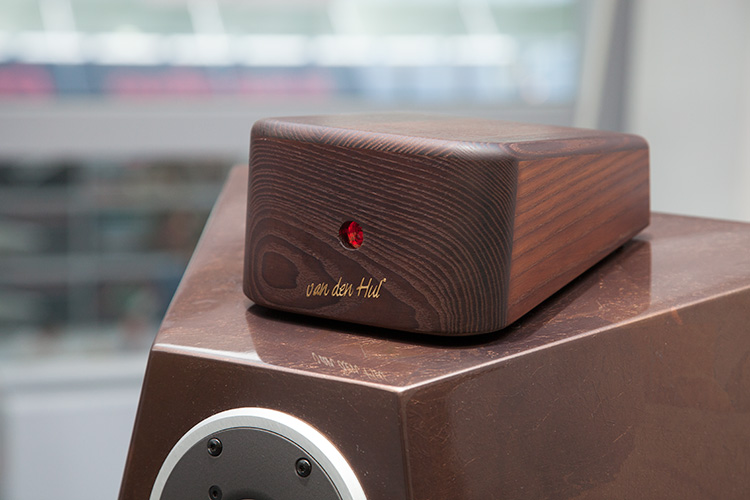 Competition for oddest product of the show was intense but I think Van den Hul’s Extender takes the biscuit, this ‘speaker’ doesn’t use sound to communicate music but some other less specific voodoo called a rotating field, but it takes all sorts as they say.