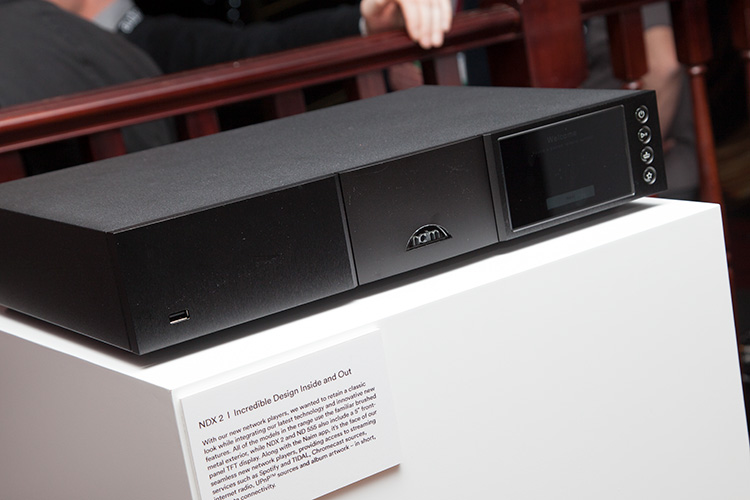 The Bristol show is a bit like Groundhog Day, there’s a sense that I have been here before but this is probably because I have been going for 30 years now, and it’s always fun getting to see and hear the latest kit. If you’re lucky you might discover some decent new music as well, the best music I heard this year was an album I already know but quite a new one in the form of Nils Frahm’s All Melody, which was present in both streamed and vinyl forms. 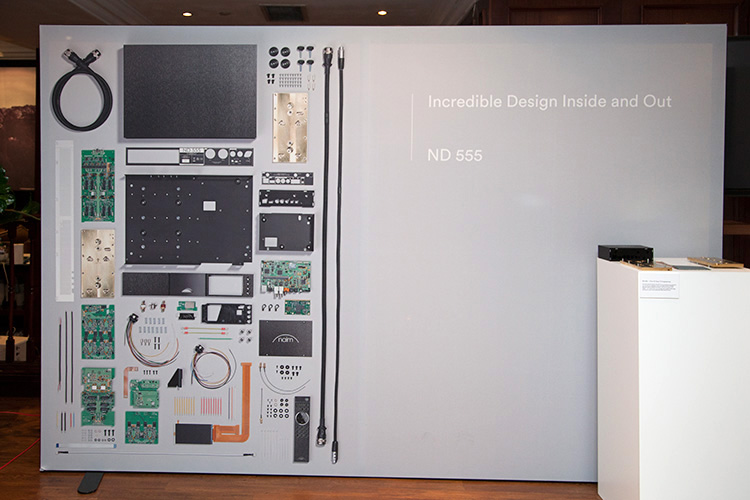 Naim took the opportunity to demonstrate a more accessible system without Statement, concentrating on Classic line products to the apparent exclusion of all else. The speakers were sparkly blue examples of the substantial but not overwhelming Focal Scala Utopia Evo driven by a NAP500 and the result was captivating. I spotted a large banner showing the parts of a component which turned out to be the as yet unlaunched replacement for the NDS streamer dubbed ND 555, a few of the shinier pieces from which were on a plinth nearby. There was also an NDX 2 on static display with clues as to how this will differ from the current NDX, most of which indicate that Naim has incorporated the streaming engine, five inch display and feature set from the Uniti range into these two streamers. As the press launch has been set for end of March I imagine that this range topping source will be available in early April at the latest. 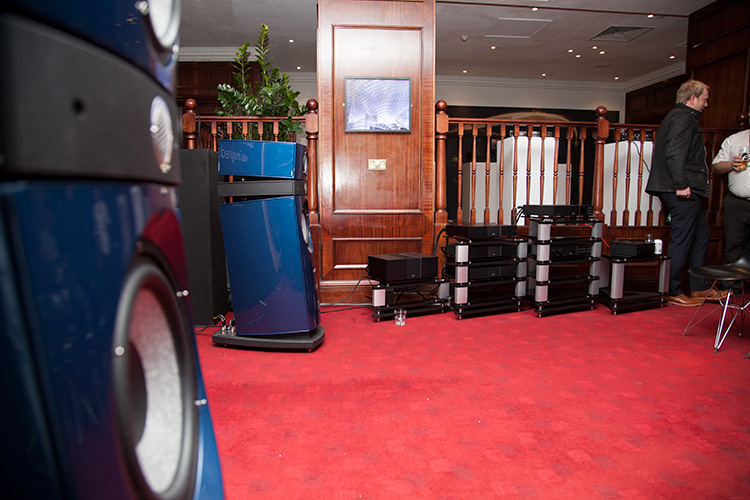 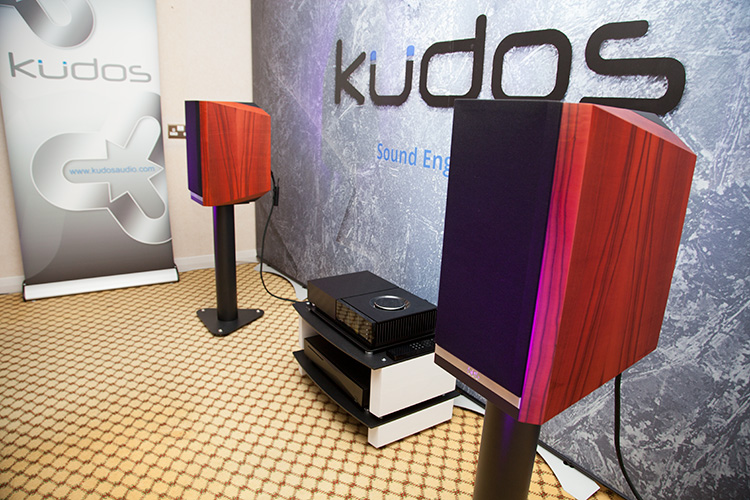 Kudos continues to expand its Titan range of stealthily styled loudspeakers with the standmount 505. This incorporates the isobaric bass loading and constrained layer cabinet construction seen in the floorstanding Titans but designer Derek Gilligan has had to come up with a cunning port arrangement that’s machined into the base of the speaker. All you can see is the vent at the front but the internal channelling is quite unusual. Kudos were using a Naim UnitiNova streamer/amp and making a very appealing sound. 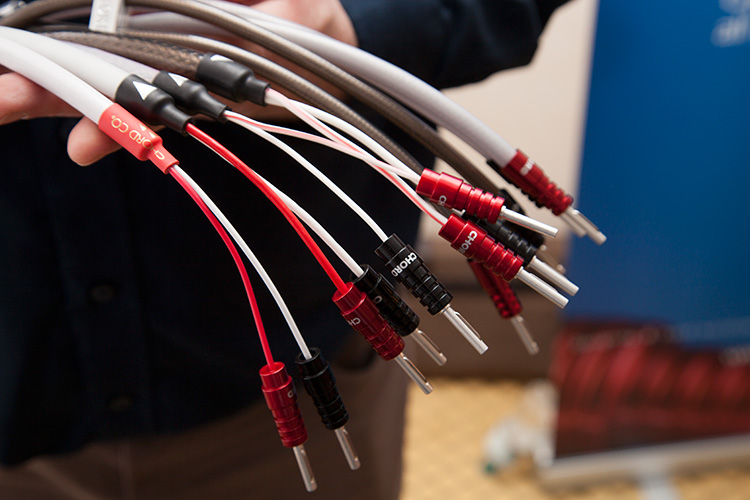 Chord Company launched its ChordOhmic speaker cable plugs at Bristol. These were developed as a result of the benefits accrued by silver plated connectors on Chord’s SarumT and ChordMusic cables and are being made available beyond the company’s own range of speaker cables. Chord chose to demonstrate an as yet unreleased contact enhancing process that they are calling Transmission Fluid, this consists of a cleaner and an enhancer that if the single cable dem was anything to go by could reap spectacular results if applied system wide. 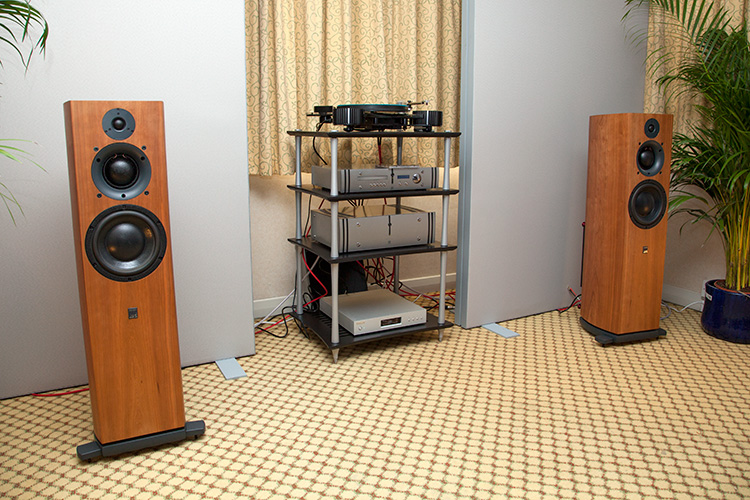 Despite being based nearby in Stroud this was the first time that ATC had taken a room at the Bristol show. They took the opportunity to highlight the new CDA2 Mk2 CD player/DAC/preamplifier and hooked it up with a pair of SCM40A active floorstanders. With nearly 250 Watts across three drivers in each channel this powerhouse would have gone a lot louder but the Marriot’s rooms aren’t the sweetest so they were taking things fairly easy and making a great sound. 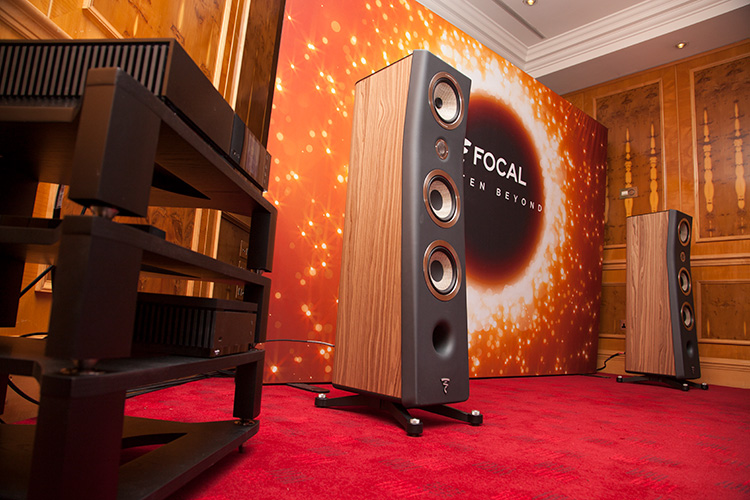 Focal had a room in the basement where they were concentrating on the new Kanta No2 which was making some appealingly relaxed sounds on the end of a Naim UnitiNova streamer/amp. This floorstander combines flax mid and bass drivers with a beryllium tweeter in a stylish modern cabinet that’s available in some pretty lively colourways, but fear not it can also be had in black. 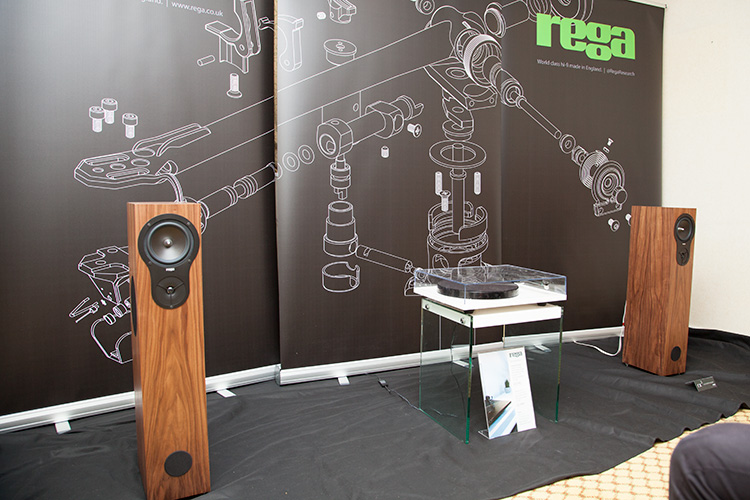 Rega have built a Fono Mini phono stage into their entry level P1 turntable to produce the P1 Plus, a genuinely plug and play entry level record player. This eliminates the extra cost, box and cables of a separate phono stage and means that you can spin vinyl through any amplifier. They also showed this years RSD (record store day) model, a combination of a shiny P2 plinth with a new white melamine platter and the hardware (arm, motor, cartridge etc) from a P1. This will be limited to 500 units some of which will be signed by well known musical artistes and goes on sale on April 21st. 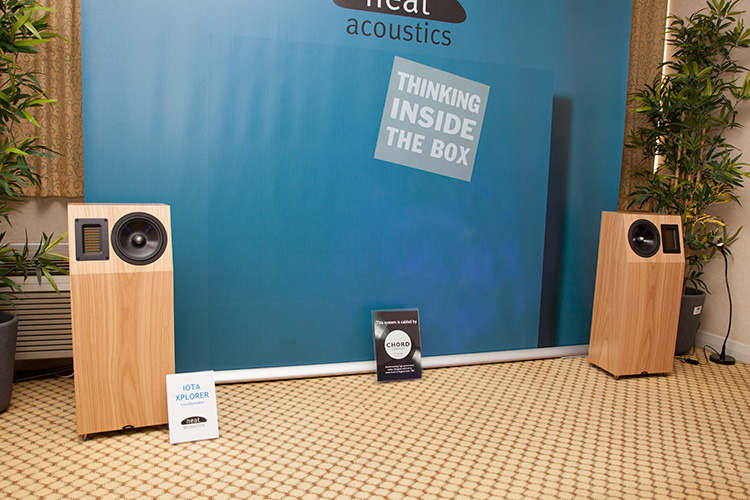 Neat’s Bob Surgeoner and Doug Graham had a Rega Planar 3 as a source for their biggest Iota’s yet. The Iota Xplorer is a pretty serious proposition with an Air Motion Transformer (AMT) planar tweeter and Neat P1/R3 midrange on view and a pair of bass drivers arranged isobaric style firing downwards in their own sub-enclosure. Standing 74cm high they sounded rather good as Neats have a tendency to do. 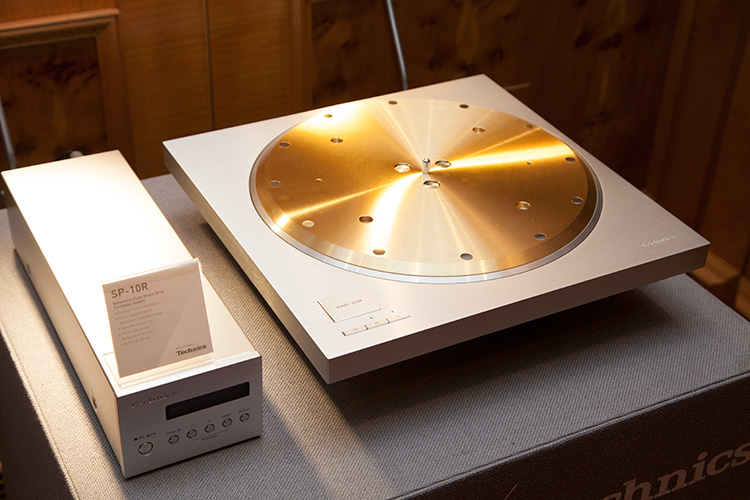 Technics have clearly got the vinyl bug as badly as the youth of today. Not satisfied with building several updated versions of DJ favourite the SL-1200 they have recreated the original range topping SP-10R, the suffix indicating that this isn’t the same as it’s seventies predecessor. This is an uncompromised direct drive design with a brass platter and outboard power supply that’s being sold as motor unit and power supply so that enthusiasts can build their own plinths and use any arm. Those after an easier life can get the SL-1000R which has the above elements in a plinth with arm and the option to run up to two extra arms. With prices at £8,000 (SP-10R) and £14,000 (SL-1000R) they are clearly on a mission to regain their old crown although whether this will wash with those of us familiar with great turntables remains to be seen.

A good review of the show Jason. I would have liked to make the trip first hand to have seen the new ND555 even though it was not demonstrated. I look forward to hearing it soon.

Thanks Dave, I'm looking forward to that too.