A basic guide to setting up a streaming system

Now that streaming audio has truly come of age we thought it might be useful to offer a few tips on how to put together a streaming system along with some tweaks that can be used to improve sound quality. Streaming is not only an easier way to enjoy your music collection it is also a remarkably easy way to improve the sound quality of a CD collection. A good quality server such as Naim’s Uniti Core will make any disc you rip to it sound better than the majority of CD players, it seems crazy but eliminating the process of reading the disc with a laser has a significant impact on sound quality.

For reliability as much as sound quality reasons a wired rather than wireless approach to networking a streamer to both the internet and a server is recommended. This is not always easy of course and many complain that it’s just not possible, by which they mean difficult to achieve. But according to networking guru Phil Harris “there is always a way if you have the will and a Hilti drill”, which sounds a bit extreme but sometimes making a hole in the wall is the easiest way. He is not keen on ethernet over the mains because it pollutes the power that your system depends on and thus undermines potential sound quality, it can even destabilise amplifiers and upset phono stages in some situations. The obvious alternative, wireless networking, suffers from reliability issues and is likely to be compromised by the quality of the routers provided by ISPs. If you can’t avoid wi-fi a third party router wired to the main modem/router for the incoming signal is the best route, just remember to turn off the wi-fi on the other unit for best results.

Standard network set-up
Below is a diagram of the connections that need to be made in order to create a basic streaming set up. The router connects to a network switch and the streamer and server/hard drive attach to the same switch. You need the connection to the router in order to control the system over wi-fi using an app on your tablet or phone, and if you stream internet radio or one of the streaming services such as Qobuz or Tidal then this has to get to the streamer. In a wireless system you connect the server/hard drive to the router, either via a network switch or directly, and the streamer can access both internet and local music files/streams over the wi-fi.

It’s necessary to include your PC on this network in order to be able to transfer and download music files to the server/hard drive, but unless you are creating an audio specific network this is likely to be the case. If you do make a network for the system then it will be necessary to give the PC access either via ethernet or wirelessly, again wires are useful here as it speeds up file transfer significantly.

A dedicated network
While the basic network set up should be reliable it can be improved from a sound quality point of view with some relatively inexpensive upgrades. The Achilles heel of digital audio is noise, not directly audible noise but high frequency noise within the electronics that raises the noise floor of the signal and masks fine detail. This noise comes from various places and one of them is the switched mode power supplies used on all manner of domestic electronics, not least computers and peripherals. The first step to combatting this is to provide a degree of isolation from noise on the main network by using a second router, this usually has to be wired to the main router but thereafter the system is much like the standard set up. 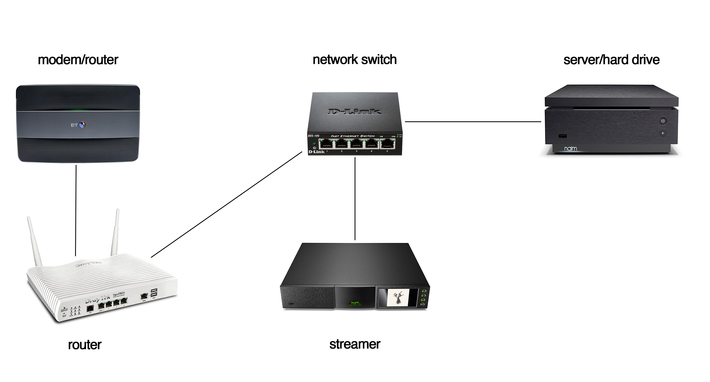 Network switches are also problematic because most have noisy switching power supplies. There are a few older switches originally built for professional installations that have decent power supplies, check the Naim forum for the most desirable pre-loved buys. Alternatively a few companies make linear power supplies for network switches and these have a beneficial effect on sound quality.

Inconveniently and much to the horror of the bits is bits brigade ethernet cable also affects sound quality, particularly in our experience the link between the server/hard drive and the switch, and the link to the streamer.

I use the terms server and hard drive to indicate that the former are dedicated music storage devices and the latter rather more affordable NAS drives (network attached storage). The reason why Naim and others have created dedicated music servers such as the Unitiserve and now Uniti Core is because this part of a streaming system is essentially the source, and as you will remember source is king. When you have a serious streamer/DAC such as any of the Naim ND models you will notice big differences between decent server and a NAS drive. This is because audio servers are designed from the ground up as low noise, high resolution storage systems that deliver music files with significantly less noise for the streamer to unpack and turn into a digital signal that is then converted to analogue. Less noise in equals more music out.